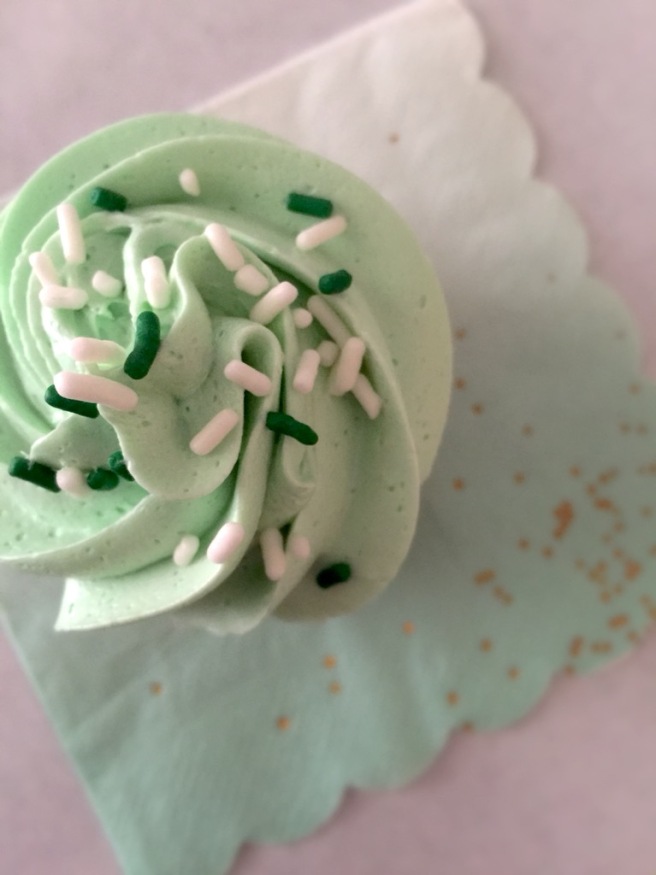 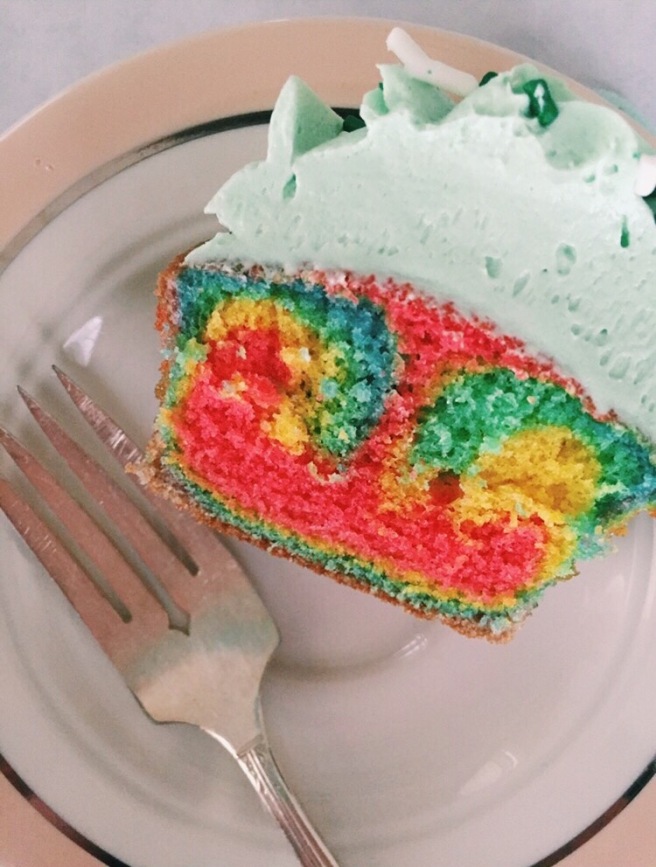 Happy spring, people! Well, technically spring doesn’t start until March 20, but who cares? It feels like spring to me!  I went on a nice evening run today as the sun was setting, and I saw loads of pear tree blossoms, cherry tree blossoms, daffodils—even plenty of the so-called “weeds” growing on our lawn.  Do any of you just love those tiny flowers that start growing around this time but are actually considered weeds? Because I do! Ah, technicalities again.

And now it’s St. Patrick’s Day tomorrow! It’s really crept up quickly this year. (Um, wasn’t it just Valentine’s Day?) Anyways, I had time after school today to work on a recipe just for this everything-green occasion. And let me tell you, it is very much so, at the point of almost being over-the-top, in the spirit of St. Patrick’s Day! Cupcakes with swirls of green frosting, green and white sprinkles, and a surprise rainbow inside (channel the leprechauns’ path to gold pots)—could it get any more festive and cute?

It’s quite simple, really: creamy vanilla frosting tinted green, vanilla cupcake batter tinted five different shades and layered before baking.  These cupcakes turn out so moist due to all the buttermilk and melted butter!  Trust me, they are so worth the time to make when comparing them to store-bought or boxed-mix cupcakes.  These cupcakes are anything from bland or dry, and the flavors aren’t masked by an excess of sugar either.

So this is the run-down of the recipe: Make the batter.  Along with the dry ingredients, you’ll use melted butter, buttermilk, an egg yolk, three egg whites, and plenty of vanilla.  Hold up! You may be thinking, Why egg whites? Well, the egg whites are really just an extra step in the process to making these supremely fluffy cakes.  You whip them up at the end, and then fold them gently into the batter.  Extra air, extra fluff. That’s all!

Next you will divide the batter into bowls, color them, and further divvy into cupcake liners—more details on that when you read the recipe. 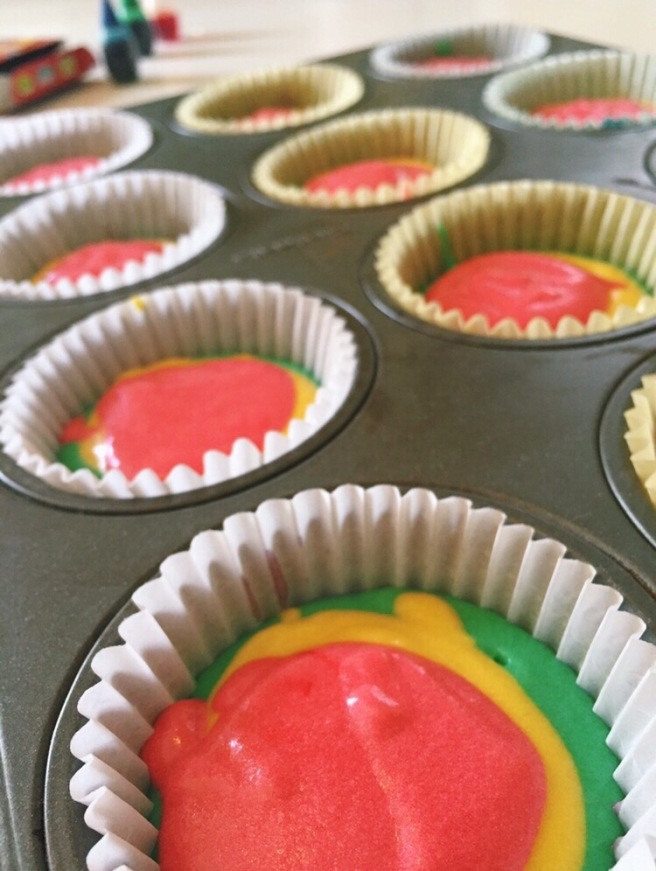 While they’re baking, you’ll make the frosting: starting with cold butter, which will allow for the heavy cream to whip up when you add it later on.  The only other ingredients in the frosting are a little bit of salt to balance the sweet, some vanilla, and powdered sugar.  You can tint it your desired shade of green and then prepare the piping bag.

When you’re piping, be sure to pile that frosting on there.  No one likes cupcakes that have been skimped out on frosting! It may be messier to eat, but that’s okay—hey, if you wear your green frosting on your face nobody can pinch you! 😉 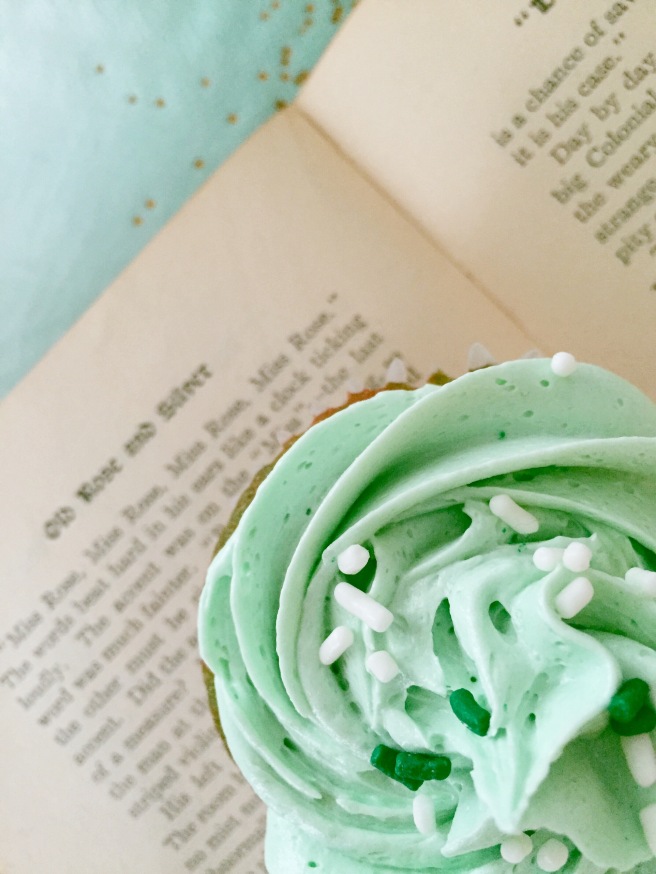 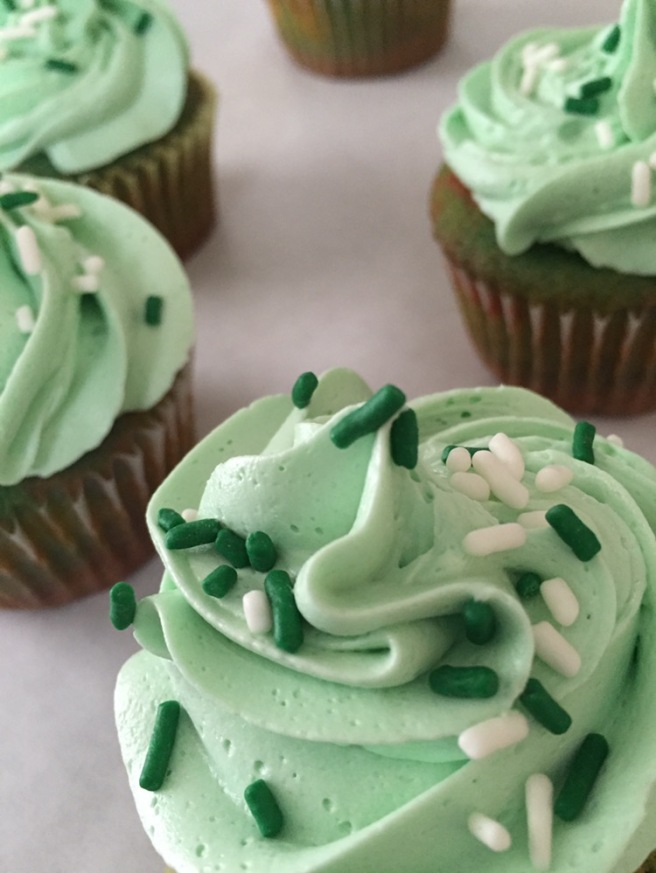 1 egg yolk and 3 egg whites, separated and at room temperature

b. Unfrosted cupcakes can be stored at room temperature for up to three days in an airtight container. Frosting can be made in advance and stored in the refrigerator for up to two days.  Bring it back to room temperature and beat it for 5 minutes again before piping onto cupcakes.

c. If serving at an outdoors event, make sure to keep cupcakes out of direct sunlight and heat as the frosting will melt.